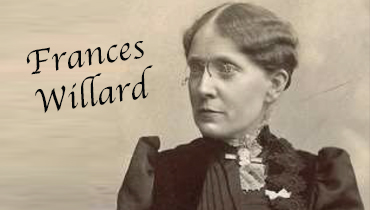 Come hear the story of one of the world’s most influential women and the organization she led in a talk given by Lori Osborne, Director of the Frances Willard House Museum in Evanston, Illinois. Her talk Frances Willard and the Woman’s Christian Temperance Union: The Forgotten Story in 19th Century Women’s Activism will cover the story of Willards’ life and evolution from teaching to social reform, and the story of the WCTU under her leadership. The WCTU was the largest women’s organization in the world by 1890 and under Willard’s leadership took on a wide array of reforms, including advocating for women’s suffrage, worker’s rights, age of consent laws, and temperance activism.

Lori holds Masters Degrees in Public History from Loyola University Chicago and English Literature from the University of Chicago. She is an expert on Willard and the role of the woman’s temperance movement in 19th century America. Lori is also the Director of the Evanston Women’s History Project and served as coordinator for the National Votes for Women Trail initiative in Illinois.